The New Year is just around the corner and many people will be making resolutions to get fit and eat better.

I’m excited to announce that starting Monday, January 5th CustomFit will be offering a 5:30 pm class Monday – Thursday (with exception to the last Monday of the month).

I can help you reach your fitness goals!

Each day will offer a different focus to offer you a well-rounded workout:

Tuesday: Tone it Up! – Build muscle and trim fat with 60 minutes of strength training

Wednesday: Move It! – Cardio-based exercises that will get your heart thumping and help you burn fat

If you’ve never been to CustomFit your first class is FREE and we have several pricing options for monthly memberships based on the number of classes you will take each week including BootCamp and PiYo.

A couple months ago my husband anxiously awaited the delivery of a stand to convert his traditional desk to a standing desk. As someone who hadn’t been tied to a desk for a few years I had a hard time understanding the purpose or even his excitement about making the change. I can honestly say given the option I would too have a standing desk.

Sitting all day makes me anxious, and in some ways, even though I’m clearly working, it makes me feel lazy. I work in a small office where I rarely need to get up to have a conversation with a co-worker and there are definitely no stairs involved in my day. The most activity I get is walking to the water cooler to refill my water bottle. By the time I leave the office I’ve accumulated a whopping 1,500 or so steps for the day.

I think it hit me the hardest when I was completing my profile for the MyFitnessPal app and selected ‘sedentary’ for my lifestyle. Ugh, I saw red flags flash before my eyes and heard warning sirens screaming through my head – personal trainer and group fitness instructor turns to a sedentary lifestyle.

Unfortunately, I’m not to the point that I feel comfortable asking for a standing desk. First, I’m still relatively new and with it being a small company there isn’t a whole lot of focus on providing customized desk set ups. In fact, I’m pretty sure most of the office chairs would fail ergonomic testing. Second, I’ve already proved myself as ‘which one of these things is not like the other.’ My co-workers think I’m a bit strange for ordering salads with no dressing when we go out to lunch and no one understands why I turn down the daily offerings of breads, pastries and other sweets.

While I don’t have the power to change my seating arrangement, I do have the ability to change my posture and activate my muscles while sitting. One of my favorite classes to teach is Pilates because it largely focuses on body awareness and activating muscles through proper posture. Pilates helps to build flexibility, muscle strength and endurance while developing a strong core. So why not apply the principles of the ‘Pilates posture’ to sitting at a desk?

Here’s how to do it (give it a try as you read through these cues):

Head: Elongate your spine and pull the top of your head towards the ceiling. You should feel taller.

Shoulders: Draw your shoulders down and away from your ears. You should also feel your chest open and your shoulders slightly tucked back so your shoulder blades are in contact with the back of your chair.

Core: Draw your navel up and in as though you are buttoning it to your spine. You should feel your abdominal muscles engage while your lower back presses lightly into the back of your chair.

Legs: Zip your legs together from your feet to your sacrum. You should feel your inner thighs (or adductors) engage.

Now granted, I understand this posture isn’t one that comes naturally. Believe me, I find myself with hunched shoulders, crossed legs and an overall droopy posture more than I would like to admit. However, now every time that I catch myself slouching I start from the top and work my way to my feet correcting my posture. It’s certainly not a full blown workout but maintaining these ‘connections’ makes my body do more work than if I was sitting here with no body awareness. For me it’s yet another good reminder that even the small things count when trying to maintain health.

Maybe after a while I will be comfortable enough in my own skin to stand at my desk, but until then I’ll continue with my seated Pilates workout. 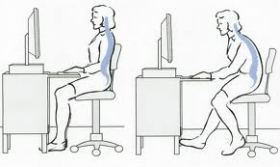 Prior to our move I spent on average 6 hours a day, Monday through Friday teaching and training. I was at my peak condition and never felt better. It was probably the first time I can remember in my adult life where I stopped critiquing myself in the mirror.

But it wasn’t just all about my physical appearance. It was also one of the first times that I felt like I had a good handle on dealing with stress. There is so much truth to the release of endorphins when working out. That’s not to say I never got upset, but I was much more likely to let things roll than to react to something I had no control over anyway.

I slept better, I consistently ate better, I was generally a happier and more positive person.

Now don’t get me wrong, we couldn’t be more thankful for our move and my husband’s new career. It’s been a true blessing to our entire family. But as with all changes, there is a transition period. While I was focused on getting everyone settled here I kind of lost sight of who I was and what I needed to be whole.

I was able to keep us eating generally healthy until summer hit and then fattening BBQs and eating out were so much easier after a long day of lounging at the pool. Notice I wasn’t swimming at the pool – just lounging.

The more inactive I became the worse my sleep patterns were and while I can’t say I was stressed out, I certainly didn’t have the calm I had come to know.

All of these things contributed to my clothes fitting tighter and tighter and longer periods of examination in the mirror. I reverted back to that girl who tried on 5 different things before deciding on an outfit that I hoped would hide the imperfections I couldn’t stop staring at.

I had not only lost all of the progress I had gained physically, I had lost the confidence and the happiness that had previously defined me.

My husband had a long week of travel which left me to do some deep soul searching. It was during that week I realized it was time to find myself again.

With the kiddos back in school and our family operating on a more normal schedule it’s been much easier for me to consistently hit the gym and make healthy meals.

I’ve discovered that while the gym I have belonged to is close and cheap, I don’t feel challenged by their classes and I’m likely to make excuses for not going. On the other hand I’ve discovered both a Boot Camp and a Boxing gym that I can’t get enough of!

The past two weeks have been a great reminder of who I was and why I loved being in the fitness industry. It feels good to have sore muscles, I like pushing myself so hard that I have to catch my breath and being drenched in sweat is the best remedy for stress or a bad mood.

The numbers on my scale haven’t really changed, and my clothes aren’t yet fitting that much different but I’m not going to focus on that – all of that will come with time. What I am choosing to focus on is that I am getting stronger and healthier with each workout and healthy meal. I will not let my return to health be defined by watching the numbers on my scale go down, I will define myself and my success by shutting down the negativity and self-criticism and replacing it with confidence and courage to keep going.

Want to work with me?

I want to help you get healthy and feel better about yourself. Here’s my three step plan:

1. I assess your current exercise and eating lifestyle.
2. I create goals based on a custom plan that will work for you.
3. I help you follow the plan and keep you accountable. Interested in learning more?

Just send me an email and we'll figure out a time.

If you sign up for my newsletter you'll receive occasional deals on training sessions, free training tips and a wrap-up of my best posts from Facebook, Twitter and my blog!